Jose Andres cooked his delicious paella on the beach, barefoot in the sand, while making gin and tonics, in the Cayman Islands, with all of us as his company. Paradise found. 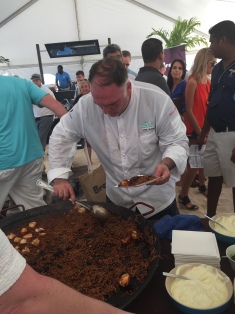 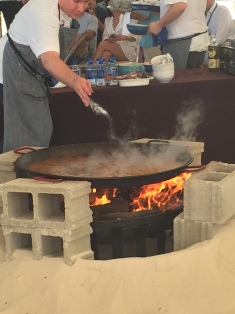 Let me just create the scene for you…clear skies, gin and tonic made by Jose Andres, giant paellas cooking of the fire on the beach…can’t lose…right? I had the pleasure of attending the Cayman Cookout 2016 in the beautiful Cayman Islands. The kick-off cooking demonstration on Friday morning at ten o’clock in the morning was the “Olé José”, a cooking demonstration with Jose Andres himself. So imagine this, ok? You roll on down to the beach, walk by your idol (strong word?) Anthony Bourdain, and pop on in to a tent on the beach where you are handed a gin and tonic that Jose Andres made while he walks around the tent barefoot in his board shorts while making paella…that’s how my day started on the big first full day of the Cayman Cookout. By the way, Jose Andres can make a mean gin and tonic that anyone would want to drink on the beach in the Cayman Islands…even at ten o’clock in the morning. Jose made an entrance to kick things off…he came up to the beach on a boat with “pirates” holding him hostage and finally dropping him on the beach to make his paella. Thank goodness the pirates didn’t keep him from cooking! We need our paella. Do not deprive one of Jose Andres’ paella. Do not.

The paella demonstration was wonderful. Jose has such an animated presence that he makes even the most simple task seem entertaining; he can pour olive oil over the paella pan and make this seem so exciting talking about the olives and the oil and how essential olive oil (Spanish of course!) is to the cooking process. He is quite the comedian as well, joking about how the olive oil provided to him was from Italy and he just couldn’t cope with inferior olive oil from Italy and not Spain. Blasphemy! 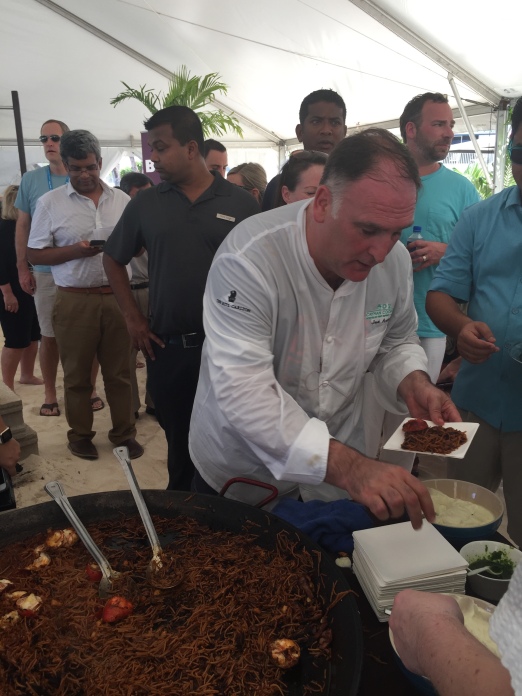 He is passionate about cooking and is a devoted lover of the cuisine of his mother country, Spain, and I don’t blame him. Spanish cuisine is some of the best in the world. I have spent a lot of time in Spain, throughout the whole country, and from the Basque Country all the way to the south in Andalucia the food is delicious throughout the beautiful regions. I am also almost as passionate about Jamon Iberico as Jose is, so you can imagine how happy I was that he sliced it himself and served it with mango to our group. I could never been a vegetarian mainly because of the inability to eat Jamon Iberico. I mean…how do vegetarians live without charcuterie? How? What? Who? When? Where? Why?

Jose Andres is a special person. His impact on the dining scene in the U.S. has been significant, especially in the city in which I currently reside, Washington D.C. His restaurants can be considered to be the cause for the revival of downtown DC and he is now making vegetables “sexy” with his fast-casual veggie chain, a favorite lunch spot of mine, Beefsteak. He is changing the way we eat in more ways than one. Jose’s paella was incredible and even at eleven o’clock in the morning I had two full plates with the aioli on top. Salud! 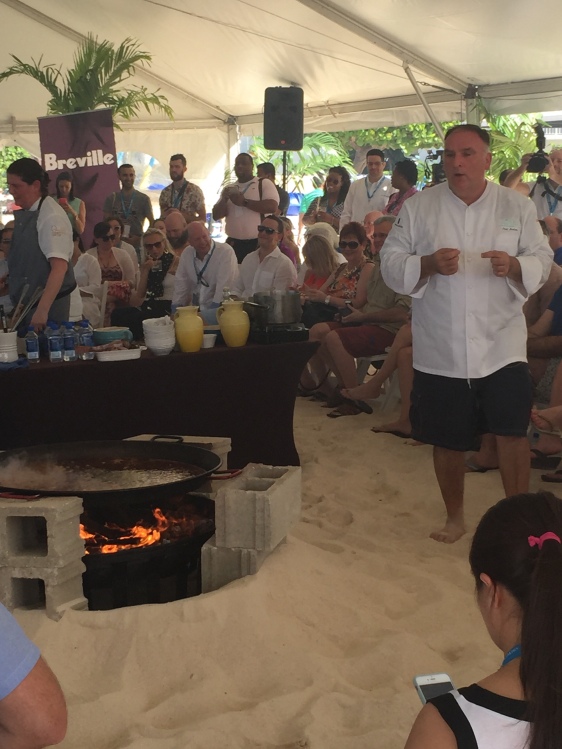